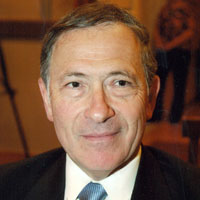 Graduated with honours (“excellent”) from the Agricultural College of Athens (today Agricultural University of Athens). Recipient of the State Scholarship during his undergraduate studies (1964-1969) and awarded with the “I. Sareyiannis Prize” for outstanding performance. Doctoral studies at the University of Reading (U.K.), Department of Agricultural Botany (1973-1976) supported by the Stathatos Scholarship.

Lecturer of General Botany at the Universities of Athens and Agricultural University of Athens (1973-1980) and Professor of Crop Production at the Agricultural University of Athens (A.U.A.) (1980-2013). Director of the Laboratory of Agronomy of the A.U.A. for more than 25 years (1981-2004, 2008-2013). Head of the Department of Crop Science of the A.U.A. (1988-89). Chair of the Faculty of Crop Science of the A.U.A. (2009-2013). Vice-Rector for Economics and Development and President of the Research Committee of the A.U.A. (1991-1997). Rector of the A.U.A. (2000-2004). Secretary General at the Ministry of Education and Religious Affairs (2004-2007). During his duty at the Ministry he contributed to the preparation of numerous Bills (Quality Assurance of Higher Education, Legal Reform of the Higher Education Institutions, Institutes for Lifelong Learning, Recognition of Academic Degrees, etc.).

He served as Chairman of the Rectors’ Conference of the Hellenic Universities (2003), member of the National Disciplinary Authority of the University Staff (2003-2004), elected representative of the Rectors’ Conference at the National Council of Education (2004), and member of the Executive Board of the National Agency for the Recognition of Academic Degrees (DIKATSA, 1997-2000). Chair of the Interministerial Committee for the compilation of the Law for Research and Development (2005-2007). Elected unanimously twice (2005 and 2008) by the Delegates of 58 countries and 10 International Organizations Chair of the Steering Committee of the Education for Sustainable Development of the United Nations Economic Council for Europe (UNECE).

Author of 8 books and monographs and of more than 90 papers in refereed journals, chapters in collective volumes and encyclopedias, and editor in Conference Proceedings. He is mainly interested in the study of environmental stresses on crop plants with emphasis on the water relations and the drought resistance of crops. His research work has been internationally recognized and he has been invited as a speaker and Chair in international conferences. Scientific coordinator in many research programmes funded by the E.U. and the General Secretariat of Research and Technology and E.U.-evaluator of many research proposals. He is a member of the Committee for the Study of the Impacts of Climate Change supported by the Bank of Greece and the Athens Academy and responsible for the study of the impacts on agriculture.

National delegate of Greece in European Councils of the Ministers of Education, in the OECD, and in the UNESCO General Assembly (Paris, 2005). Member of many sclentific associations.